The First Lesson my Father Taught Me about Money: The Bike Story 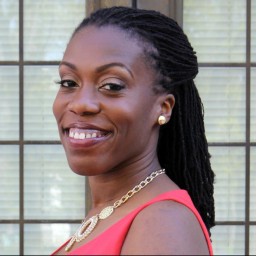 In honor of Father’s Day, I want to share the most important, financial lesson I’ve learned to date. It’s one that my dad taught me and is the reason I am The Budgetnista. The Bike Story…

October 1990, I was an 11-year-old, budding Budgetnista and was so skinny that my mother constantly questioned my doctor about the safely of my frail frame. To add insult to injury, I had a Jeri Curl. For those of you unfamiliar with this particular form of torture, it’s a “hairstyle”, for lack of a better word… [This is me. 11-year old Budgetnista]

Luckily at 11, it would be years before I realized the cruelty of my current physical state. Besides, it was October and my birthday was the only thing on my mind.

The day everything changed…

I nervously approached my father, who was “doing the bills” (as was customary) at the dining room table. In hindsight, it probably wasn’t the best time to make my big birthday request, but doing so changed my life.

A little background about my Dad:

He was born and raised in humble beginnings in a small, rural village in Nigeria, Africa. He worked as a financial professional and holds degrees in both finance and economics. He is The American Dream personified. He came to the United State with little money and a dream for more. He later brought the love of his life from his village to join him (my mother). Through hard work, discipline and a sickening work ethic, he earned his Bachelors and Masters degrees, had 5 lovely daughters, college educated all of them, and recently retired as the Executive Director of a New Jersey based nonprofit, where he worked for over 30 years. He is my hero.

Back to the bike story…

I approached my father determined to get a bike for my upcoming birthday. Why did I want a bike so badly? Because my older sister got a bike for her 11th birthday (so naturally, so did I).

So far, so good, I thought.

“Ummmm, my birthday is coming up and…….I want a bike”. The last part of that sentence was said with a rushed nervousness as I shifted from one spindly leg to the other in dreaded anticipation.

My father looked up from his old-school calculator (you know the one, it had paper coming out of the back as you made calculations). He looked at me and asked me to sit down. Uh, oh…

“Odochi”, he said (for those of you who don’t know me well, Odochi (O-dough-chee) is my African name.

Oh, I forgot to mention that my dad has a Nigerian accent that I usually imitate. So if you know what that accent sounds like, feel free reread the above dialog and insert it.

“Ok-o, then you’ll have to help me pay some bills”.

THIS! This is what I was afraid of. I knew that my father was not going to let such a large request go without using it to teach me a life lesson. As a child of two African parents, I was no stranger to parables, antidotes and analogies. It was a way of life in our home. My father explained that he was in the middle of paying some bills and that if I wanted such a large purchase for my upcoming birthday, I had to help.

I hung my Jeri Curled head down in dismay. Wild thoughts ran through my head. How could I pay bills? Would I have to get a job? Bills didn’t seem like much fun. How long would I have to pay bills and just what did bills have to do with my Birthday Bike?! Luckily, my father quickly clarified his, “you have to help me pay some bills”, statement. What he meant was, he wanted me to add up all of the household expenses and subtract them from what he and my mother made each month.

Like a true Libra, my mood quickly shifted from being distraught to elation. I loved my dad’s calculator. It made cool noises, had paper curling out of the back and up until this point, my sisters and I were forbidden to use it.

My dad gave me his handwritten list of the family’s bills and explained what each of them was. Before then, I never knew what a mortgage was or that you had to pay insurance to drive a car, or even that you paid for things like heat. I joyfully added up the bills, then added up my parent’s monthly income, then subtracted the bills from what they made.

At 11, I wasn’t certain if my parents made a lot or not, but I did know less and more. What was left over after subtracting the bills from their income was way less. After nervously handing my father back my calculations, he explained that before he could spend money on “fun stuff”, bills always had to be paid. He then told me that the cost of my bike had to be less than the money that was left over. I asked why I couldn’t use all of the money if the bills were paid. My dad said because some of the money (excess non-bill money) was for savings and some was for “fun stuff” for my sisters too.

I wasn’t particularly concerned with buying “fun stuff” for my sisters, especially since it was my birthday. What I was concerned with was the money lesson and what it meant for my Birthday Bike and me. The bike that I wanted was a beautiful, purple, bike with tassels, a large white, wicker basket in the front and lots of unnecessary glitter. To an 11yr old girl, it was perfection on two wheels and just my size. [Not quite as beautiful as my original dream, Birthday Bike, but you get the picture.]

I began thinking about the household finances. I realized that if I got a bike that was my size now, I’d grow out of it by next year and may even have to give it to one of my little sisters (like my favorite red dress…long story). I knew that if I got too big, I might have to ask for another bike for my 12th birthday. My 11-year old self thought, “what if I wanted a camera instead?” My older sister got one when she turned 12 (yes, I was still on that again).

So at 11 years old, I became The Budgetnista and made my very first, purposeful, conscious money choice. I financially forecasted (made a financial choice now, based on predicted, future events a.k.a. my inevitable growth), and I decided instead of my dream bike, that I’d get a larger bike I could grow into… and boy did I.

The bike that I asked my dad to purchase was big, blue and masculine. It was the exact opposite of the original bike I wanted. The bike was so non-11yr-old-girl, that even my father asked if I was sure. I was. Although my bike gave some of the other kids at school, yet another thing to tease me about (add that to my hair and skeletal frame), I was proud of myself for making a choice that I felt made better long-term, financial sense. Can you tell I was a Budgetnista-in-the-making? [My actual Blue Birthday Bike. Yup, I still have it!]

At the time, I didn’t realize what an important role that my bike would play in my life. I also didn’t realize that my Blue Birthday Bike would be the only bike I’d ever get. Because I got the bike so big, I was able to ride it:

Even though I no longer ride my bike, my Dad now rides this bike for exercise. I got the bike when I was 11, I’m now 33…. 22 years later and my Blue Birthday Bike is still being used!

I’m sharing my Bike Story with you to show just how AWESOME my dad is and to illustrate that there is no such thing as a small financial choice. If I can make a decision at 11, that is still relevant today, how much more of an impact are your current, financial choices on your life?

Sometimes when faced with the choice of frugal vs. fashionable, we have to have the courage to choose the Blue Bike. [My awesome Dad, my awesome bike and me.]

* WAIT! Before you leave, what awesome lessons have you learned from your father? They don’t have to revolve around finances. I’d love to know. Share them with me in the comments below. 🙂 *

About the Author Tiffany Aliche

Please log in again. The login page will open in a new tab. After logging in you can close it and return to this page.

We use cookies on our website to give you the most relevant experience by remembering your preferences and repeat visits. By clicking “Accept”, you consent to the use of ALL the cookies.
Do not sell my personal information.
Cookie SettingsAccept
Manage consent

This website uses cookies to improve your experience while you navigate through the website. Out of these, the cookies that are categorized as necessary are stored on your browser as they are essential for the working of basic functionalities of the website. We also use third-party cookies that help us analyze and understand how you use this website. These cookies will be stored in your browser only with your consent. You also have the option to opt-out of these cookies. But opting out of some of these cookies may affect your browsing experience.
Necessary Always Enabled
Necessary cookies are absolutely essential for the website to function properly. This category only includes cookies that ensures basic functionalities and security features of the website. These cookies do not store any personal information.
Non-necessary
Any cookies that may not be particularly necessary for the website to function and is used specifically to collect user personal data via analytics, ads, other embedded contents are termed as non-necessary cookies. It is mandatory to procure user consent prior to running these cookies on your website.
SAVE & ACCEPT